Locally known as Semana Santa (Holy Week), Easter is the most important celebration in Spain, and stands out for its epic brotherhoods’ processions and unique, age-old traditions specific to each region.

The atmosphere that characterizes the festivities is usually solemn, the picture spectacular, and everything seems fully immersed in emotion. Don’t let yourself be fooled, though – this is still Spain, which means neither the strong religious beliefs nor the somberness of the moment can hide the nation’s fervor for pomp and lively fiestas.

These being said, let’s take a closer look at the distinctive customs and traditions that accompany Semana Santa in various Spanish provinces.

Here, the most important Catholic holiday is commemorated with a week full of color, art, religious fervor, and extravagant processions. The most spectacular events take place in Malaga and Seville, where the streets are taken over by flamboyant parades and intricate religious displays depicting biblical scenes.

Like everywhere in Spain, the festivities begin on Palm Sunday (Domingo de Ramos) and last until Easter Monday (Lunes de Pascua), with the most dramatic and passionate parades held on Maundy Thursday and Good Friday.

While the Semana Santa festivities in Andalusia are the most spectacular, the ones in Castile and León are often regarded as some of the most authentic, solemn, and austere in the entire country. Among the cities that hold remarkable processions are León, Zamora, Salamanca, Toledo, Avila, Segovia, and Valladolid.

This scrumptious calorific treat is traditionally eaten in Spain over Easter.

Madrid-based food blogger Anneke Kooijmans shares a recipe for the classic Spanish Easter dish Torrijas with The Local which she describes as “like French toast, but different…”

Torrijas are a Spanish Easter dessert, they are like French Toast, but different.

I hope you enjoy and Happy Easter!!!!!

A must see chapel to visit in Madrid. What I love the most is all the angels depicted on the ceiling are women.

After his death aged 82 on April 16th 1828 (having failed to recover from falling down the stairs at his Cours de l’Intendance residence), Goya was buried in a tomb in the Chartreuse cemetery in central Bordeaux alongside his compatriot Martin Goicocchea, a former mayor of Madrid and father-in-law to Goya’s son Javier. In 1899, both bodies were exhumed to be transferred back to Spain. Neither body could be formally identified. For a start, Goya’s head had disappeared! It is believed that it was stolen by one of Goya’s former models, the Marques de San Adrian, who may have sought to understand the workings of Goya’s brain by doing some “hands-on” research. Goya’s head was never to be found. The two bodies were transported in a single coffin and buried with others first in Saragosse then transferred to a joint mausoleum at the Royal Chapel of Saint Anthony of La Florida in Madrid.

The Royal Chapel of St. Anthony of La Florida (Spanish: Real Ermita de San Antonio de la Florida) is a Neoclassical chapel in central Madrid. The chapel is best known for its ceiling and dome frescoes by Goya. It is also his burial place. After his death aged 82 on April 16th 1828 (having failed to recover from falling down the stairs at his Cours de l’Intendance residence), Goya was buried in a tomb in the Chartreuse cemetery in central Bordeaux alongside his compatriot Martin Goicocchea, a former mayor of Madrid and father-in-law to Goya’s son Javier. In 1899, both bodies were exhumed to be transferred back to Spain. Neither body could be formally identified. For a start, Goya’s head had disappeared! It is believed that it was stolen by one of Goya’s former models, the Marques de San Adrian, who may have sought to understand the workings of Goya’s brain by doing some “hands-on” research. Goya’s head was never to be found. The two bodies were transported in a single coffin and buried with others first in Saragoza then transferred to a joint mausoleum at the Royal Chapel of Saint Anthony of La Florida in Madrid 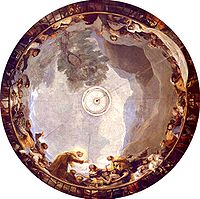 The chapel was built in the general location of two prior chapels built in the 1730s, which were on the land of a farm called La Florida. The present structure was built by Felipe Fontana from 1792 to 1798 on the orders of King Carlos IV, who also commissioned the frescoes by Goya and his assistant Asensio Juliá.The structure was declared a national monument in 1905. In 1919 Goya’s remains were transferred here from Bordeaux, where he had died in 1828. In 1928 an identical chapel was built alongside the original, in order to allow the original to be converted into a museum.On every June 13, the chapel becomes the site of a lively pilgrimage in which young unwed women come to pray to Saint Anthony and to ask for a partner. The frescoes by Goya were completed over a six-month period in 1798. The frescoes portray miracles by Saint Anthony of Padua. On the main cupola of the chapel Goya depicted Saint Anthony raising a dead man; instead of portraying the scene as occurring in thirteenth-century Lisbon, Goya relocated the miracle to contemporary Madrid.

Again a enjoyable place located in my neighborhood, Chamberi. We go there a lot, specially on weekends. When my daughter came to visit, she took some pictures of dogs and children playing. Later on I used the pictures she took as a reference photos. This is an all-in one plaza for me: coffee-shops, a jazz club, bars, restaurants, an ice cream parlor, a drugstore and a hotel. There is also a playground for children and a tiny bookstore in the center of the plaza which specializes in used books and vintage post cards and pictures of Madrid.

What I love about it is that, on one hand, it is your neighborhood plaza. Not just the place to sit for a drink or to have brunch, but also where people take their children after school, or where they walk their dogs while reading the newspaper. And on the other hand, Plaza de Olavide is the starting point of a night out on the town because many cool clubs and restaurants are in this same area. It has it all, daytime activities and nighttime fun.

Its location also helps to make it even more charming, because is at a walking distance from Gran Vía and very close to Plaza Colón. Also pedestrian street Fuencarral, filled with all kinds of shops, is 10 min away. It would seem busy and noisy at times, but it could also feel quiet and calm at certain hours. It depends on what you want to do, but it is definitely worth a visit.

This is one of the most visited markets in Madrid. Walking distance from Plaza Mayor, in the heart of the city. I love their concept, it’s not a traditional grocery market but a gourmet tapas market where you can get a beer from one vendor and some tapas from the other. Just find a place to sit (if you are lucky enough) and enjoy it! I strongly recommend the oysters and Cava, just to start. The Mercado de San Miguel is one of the best things in Madrid, and the popularity of the market’s food and wine stands and convivial atmosphere has soared to a stratospheric level. The weekends are heaving with happy locals and tourists alike munching on the gourmet goodies (stuffed peppers, oysters and champagne, Galician octopus, Catalan canelones, marinated olives, artisan cheeses, Jamón de Bellota, Chorizo, etc) and buckets of vino de Rioja, Ribera del Duero, Sherry, Cava, Priorat….

And if you find yourself in Madrid, a visit here is a must. Best enjoyed midweek and before dinnertime. If you don’t mind crowds, the weekends are a whole lot of fun. But take care with the pick-pockets … it’s a very touristic place.

For this artwork I choose a blue king crab. Mr. Blue Crab is really beautiful ans has light blue spots on his back.I had made it already digital art and yesterday I made it in watercolor. I decide to post both.

Callinectes sapidus (from the Greek calli- = “beautiful”, nectes = “swimmer”, and Latin sapidus = “savory”), the blue crab, Atlantic blue crab, or regionally as the Chesapeake blue crab, is a species of crab native to the waters of the western Atlantic Ocean and the Gulf of Mexico, and introduced internationally. C. sapidus is of significant culinary and economic importance in the United States, particularly in Louisiana, North Carolina, the Chesapeake Bay, and New Jersey. It is the Maryland state crustacean and is that state’s largest commercial fishery.[2]

I decide to make a typical Brazilian drink called Caipirinha, that’s usually made with Cachaça and lime, but this not exactly fizzy, but… well I wanna do it fizzy anyway. You can make it with vodka too but in Brazil we drink it with Cachaça, which is made with sugar cane.  Here you can find the recipe.

The Caipirinha is a rustic form of a Daiquiri: just rum, sugar, and lime. But the rum is cachaça, the sugar is usually raw and the limes are muddled and left in the drink.

Place lime wedges and sugar in a rocks glass. With a muddler press down and twist the limes to release the juice (and the oils in the peel). Add crushed ice, then cachaça and stir the drink. Fill up with ice.

***
Most cachaça made in Brazil is industrial in nature and flavor. It’s a rough spirit so the bits of lime pulp, oils from the peel, and a more robustly flavored brown sugar soften it. When using a more refined cachaça (see below) I tend to use simple syrup and sometimes I even strain the drink and serve it in a cocktail glass, just like a Daiquiri.

Flavored Caipirinhas are another popular way to serve the spirit. Take whatever berry or fruit is in season and throw it into the glass with the limes to muddle it together. Should you host a muddle-your-own-Caipirinha party this summer, you can put out a variety of fresh ingredients for people to mix, much like a build-your-own-Bloody Mary bar.

The Caipirinha has become a global cocktail, popular in nightclubs and beach parties around the world. In Germany the drink has been popular for more than a decade. In the US, refined, boutique brands of cachaça including Leblon, Cabana, and Sagatiba help make the drink a little more elegant. They bring cachaça and the Caipirinha off the beach and into the cocktail bar.

Now we just need to practice their pronunciation so the bartender will understand us when we order one.